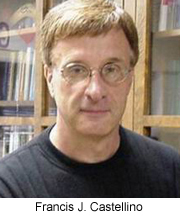 Scientists from the University of Notre Dame’s W.M. Keck Center for Transgene Research have received a $9 million, five-year Program Project Grant (PPG) from the National Institutes of Health (NIH) that will advance the Universitys contribution to hemostasis research. Hemostasis is the collection of processes regulating bleeding, clotting and the emergence of new blood vessels.

The grant, from the NIH’S National Heart, Lung, and Blood Institute, will fund three medically relevant areas of research:

The grant also will help support an administrative infrastructure and enhance the University’s existing Keck Center histology and animal husbandry efforts. Moreover, it solidifies Notre Dames standing as a transgene research center with a primary focus on determining how proteins, traditionally associated with blood coagulation, anticoagulation and clot dissolution, contribute to other pathologies.

“It is rare for a university without a medical school to receive a highly sought PPG from the NIH of this magnitude in molecular medicine,” Castellino, the program director of the grant, said. "The competition for these grants is very heavy. We competed with the best medical schools for this program grant and its success demonstrates that Notre Dame can succeed in well-thought out areas of molecular medicine."

This is the second PPG that Notre Dame researchers have received from the NIH. Frank Collins, George and Winifred Clark Professor of Biological Sciences, received a $9 million award from NIH’s National Institute of Allergy and Infectious Diseases (NIAID) in 2001 to help reveal the genetic secrets of malaria.

“We are delighted to be among the select group of universities receiving PPG grants from NIH,” said Jeffrey C. Kantor, the University’s vice president for graduate studies and research. “Because these grants are so competitive, the fact that we have received two of them is testament to the quality of work being done by our researchers.”

The Keck Center long has focused on identifying and characterizing genes involved in hemostasis as they relate to regulation of blood coagulation and other diverse physiologies and pathologies. A primary focus has been on inflammation, which is closely tied to the blood coagulation process. Inflammation is a natural defense response to tissue damage and infection. Scientists also are finding increasing linkages of acute and chronic inflammation with heart disease, atherosclerosis, cancer, asthma, and a number of other pathologies, according to Castellino.

The Keck Center conducts whole mouse research and has more than 50 different strains of mice with altered expression of a number of genes.

“One line of mice has a genetic defect that causes the animal to first develop intestinal polyps, which transform into an invasive carcinoma,” Castellino said. "Another mouse strain spontaneously develops atherosclerosis.

“We ‘chip’ out a gene or make changes and reinsert it into the genome and then observe the animal’s response to that deletion or change in order to determine the role of that gene in normal physiology or pathology. If you are performing these studies in a test tube, you only see what you’re specifically testing for. In the whole animal, you see everything, even unanticipated effects, such as its role in pregnancy maintenance.”

Notre Dame’s potential as a leading research center in transgenic research related to hemostasis became apparent in 1997, when its scientists produced a mouse with a genetic deficient for a protein involved in blood coagulation, one of the first in the world. This research, and the establishment of the Keck Center, drew the attention of the Walther Cancer Center in Indianapolis, ultimately resulting in a Walther Cancer Center site at the University. This center oversees interdisciplinary projects involving 25 Notre Dame faculty members in chemistry and biochemistry, biological sciences and preprofessional studies in the College of Science. A number of the center’s research projects involve inter-university collaborations with Indiana and Purdue Universities and the University of Michigan.